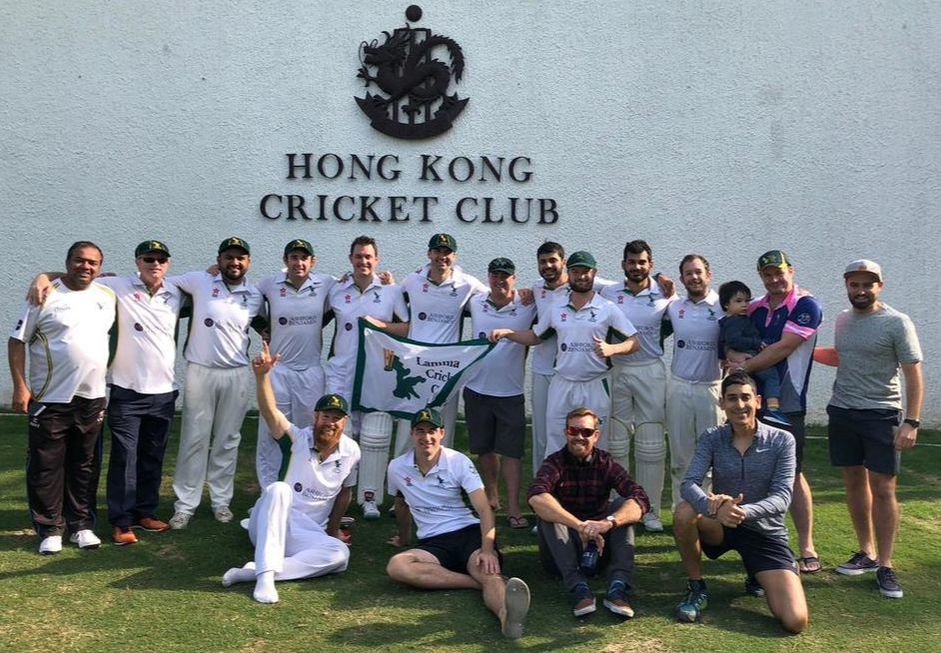 With the sun shining, there was a sense of excitement when our players started to arrive for our first Division 1 league game at HKCC.

After a decent warm up with the lads fully engaged, the toss took place and I was very much undecided on what to do if I called correctly. Thankfully that decision was taken out of my hands as the HKCC captain called correctly and elected to bat first.

After a short huddle in which I stressed the importance of the collective working as one, we took to the immaculate playing field of HKCC. It didn’t take long for Lamma to strike with Vinny swinging his 4th ball into the opening batman who deflected onto his stumps (the batsman may well have been softened up with a waist high full toss 1st ball!)

Next up Akbar with the new cherry. First ball and Lamma landed another blow as one of HKCC ‘big guns’ was caught behind. Lamma were on fire with HKCC Nomads 0 -2! In the 5th over, we entered dream land as another one fell after some great reactions by Akbar off Vinny. Nomads were now 6-3!!

The Nomads were then were forced into a period of consolidation as they moved their score slowly into the 30s. Enter Brenton McDonald (in the 9th over) for what was soon to be Lamma’s greatest ever spell of bowling and one of the best amateur spells of bowling seen by me. The 4th wicket fell after a great catch by Boots off Brenton. Then Brenton really got into his work; bang, bang, bang, bang – HKCC Nomads all out for 46 off just 15.4 overs.

Brenton finished with figures of 4 overs, 3 maidens, 5 wickets for 2 runs (including 3 wickets in an over). Enough said.

In amongst the carnage, it is worth mentioning a cracking catch by Justin off Ports after the ball was absolutely smoked to him at cover. He was left to peel remnants of leather from his hands!

At 14:13 (yes believe it), Ching and Bester walked out to bat. Ching faced his 2nd ball and it went sailing over the scoreboard knocking all the stuffing out of the Nomads. Just 7.2 overs later and Ching walked off 26* after we strolled to victory with a solid opening partnership between Bester and Ching accounting for most of the runs.

The beers were then opened on the outfield bathed in sunshine and a good smattering of Lamma members present to celebrate one of the finest and biggest wins in our history.

A final mention must go to the HKCC Nomads players who sportingly shared a beer post game. It highlights the spirit in which Lamma play the game and the good relations we have built with HKCC over the years.

It just leaves me to say 2018 has been a magical year for Lamma and one we should lock into the memory banks. We can take great momentum into 2019.

Arriving at the ground the general consensus was a day full of runs, and many of them. It was a totally different story but more of that’s to come…

The ground was in fair condition and short boundaries was heard from the team members. Losing the toss, we were put into field.

Opening was Cashman who sprayed the ball around with a couple of wides and no balls so he decided to change tack and go around the wicket. Brenton opened with a tight spell and then Cashman found the edge of a bat and Akbar took a stunning catch to remove the opener. 4 balls later and bang! Bowled. Pak Assoc. are now 2-14!

The rain started to fall and a wet and slippery ball was not easy to manage but credit to every bowler, they held a good line and length which the bats struggled to play. Royce came, on went for 10, then had 3 tight overs with 0-14 off 4 overs. Cashman clean bowled the remaining opener and two overs later bang! clean bowled another. Pak Assoc. 4-44 and reeling. Samay brought more misery with the best catch I have seen in a long time in gulley by sticky fingers Akbar. 5-51 and Lamma CC in control. Akbar took the ball and another wicket fell, caught behind and 6- 68, a sub one hundred score imminent. Pak Assoc. have fought back in recent games when in difficulty and disciplined batting saw them climb to over 100. The Woodman entered and with immediate effect a skied ball to buckets junior McDonald, Brenton, for a good catch. Not long after the new bat got too excited and Justin and Boots combined to create a run-out and start a collapse. The Woodman struck twice more with a big air shot and bowled and an LBW to see the last 4 Pak Assoc. wickets go down for 10 runs.

Lamma CC on fire and confident…

The bats strode to the wicket, the Captain telling everyone half the job was done, not to get ahead of ourselves.

The opening bowlers struck in the second over with Wardy out for a duck. Samay and Akbar had a good stand of 24 runs before Samay was bowled for 16. Then the collapse came, 4 wickets in 8 runs slumped Lamma CC to 5-35 and just after drinks the 6th wicket fell with Lamma in deep trouble at 6-49. Batting deep, Lamma still looked in with a chance with 62 to get for victory, could this be another KCC Tartars game and heroics from Lamma?

Brenton fell and Akash a Golden Duck, Lamma now 8-58 and the wind almost gone from our sails. Sarge departed for equal top score 16, a Woodman flurry and Lamma CC lost the game by a staggering 42 runs. We well and truly snatched defeat from the jaws of victory.

Summary
Many lessons to learn:
A game is not won until both innings have played out.
We need our bats to stand up when times are tough and play through them.
Partnerships will be key for our wins.

Next week’s another game, lets come out and win it!
Lamma CC vs KCC Crusaders Match 3 Report
By Royce MacDonald

First of all, sorry for the late report, our first actual game after two early season washouts.

We lost the toss and were sent in to field on a hot day at KCC. The opening bowlers were taken for runs and KCC started quickly with both Vinnie and Akash going at over 7 rpo. A change of bowlers saw some slowing and the first wicket to fall, a catch to Akbar off Brenton. Not much joy in the field until drinks where it was 1-110. The run rate continued to grow despite bowling changes and the only other breakthrough was Peter Wooden for a well-earned 113, getting out to Akbar.

Akbar and Woodsy were the only bowlers under 8 rpo! Final score 2-285 after 35 for KCC.

Akbar and Justin decided to go and try to win the match. Our batting graph rpo was ahead of KCC, things started to turn and Lamma was getting on top but approaching drinks two key outs changed the momentum; Akbar to a reverse sweep and then Sarge run out for a Diamond Duck.

Things still looked gettable and with batting still to come.

Justin departing after drinks caused a slowdown while Brenton and Brad steadied the ship. A quick departure of both Brad and Vinnie saw the Lamma tail flurry with a great hoick from Woodsy sailing over the boundary, Lamma finally out for 227 in the 35th over. A decent score, but some lessons learnt.

In the heat 285 was a big score and there were a couple of chances that could have gone our way and the game may have been a different result. We were on target to win until we lost 3 wickets within 14 runs and then another 3 in 20 runs. Massive impact. Extras at 17 gave nearly two more overs bowled.

Summary
KCC will be a Top 3-4 team in our division, we were not disgraced. We need to work on less than 10 extras from bowlers and depending on the ground, setting bowling economy rate of less than 5. In batting, partnerships now become more key and we should aim for a couple of 50+ to set or chase down winning scores.
For the latest Saturday League table, fixtures and player statistics, go to www.crichq.com and create your own login. Then go to www.crichq.com/competitions/8894/draws/33117/standings_table (you wont be able to go there directly from this link).