LCC
The weekend event started by sending up an advance party of Brad, Mikey and Rob who surprisingly remembered they had duties to do once they got off the train!
The rest of us, with the exception of Haider, met at Hung Hom station for the train trip up and soon it was all-aboard. Woodsy’s translation skills for a minibus came in very handy on arrival and we were taken directly to the Leeden Hotel, a very decent hotel indeed - most unlike our usual choices. It was straight over to McCawley’s after a 5 minute check-in to catch up with the exceptionally advanced party…
The business end started early on Saturday morning for the LCC-Pretty Vacants while the LCC-Soi 7ers arrived at a much more leisurely hour. It didn’t help their results much though. Haider, captain of the PV's, arrived at a yet further leisurely time.
It was a pretty relaxed afternoon followed by fines for the day before getting the bus back to the hotel while singing songs we mostly didn’t know the words to.
A fine spread was had back at McCawley’s with live music, beer & pool before venturing out into the city for more of the same.
Sunday morning came around all too early, as it usually does when you are on tour, and it was back on the bus for finals day.
LCC-Pretty Vacants made it to the Cup round while LCC-Soi 7ers were placed in the Plate. Unfortunately the PV’s didn’t get through from the semi-finals but the Soi 7ers did make it from their round and in an extraordinarily tight final managed to clinch the Plate. It was the second Plate this group had won within a matter of weeks and it was good to have brought another trophy back to Hong Kong for the Forbes soon-to-be-built LCC trophy cabinet!
Needless to say there were plenty more fines to be had then it was back on the bus for the journey back to the train station and a relatively subdued ride back to HK.

Last, but not least…
The Canton Sixes had previously been organised by our friends across the border but the event was not held last year. Hosting the event this time, it was the first Sixes event Lamma CC had hosted since 2010, and our first outside Hong Kong.
Led by Canadian Mike, Lamma CC quickly got moving on organising and promoting the event. Chucker created the website and then Andy F. organized the train and hotel bookings. Monty was pulled in over the weekend to use his experience of event organising while the tireless Rob-Riggers-Imran did a lot of admin duties.
Truly a team event and thank you to everyone that also got involved in making the Canton Sixes 2015 a very enjoyable, competitive and well-run event!
The event had 8 teams in total, two from ourselves, two others from Hong Kong, two from Guangzhou and one each from Beijing & Hangzhou.
Further images and information can be found on the CantonSixes.com website
Lamma Putty Trophy 2014
Putty Beach CC vs. Lamma CC
Guanggong International Cricket Stadium, Guangzhou, China
Saturday, February 22, 2014
By Andy Fullard

First, the background:
May 2013
Lamma CC visit Guangzhou for the first time to compete with Putty Beach CC for the inaugural Lamma Putty Trophy. The tour was organised by Tom Woods, a founder member and former player of the Putty Beach Club and now a Lamma CC stalwart. It is Lamma CC’s first 50 over game in quite some time.
Putty Beach manage 192 all out. That’s gettable.
It wasn’t gettable. 75 all out. Thanks for coming fellas! See you next year.

February 2014
We’re coming back. And we want that trophy. We’ve all learnt the team song, we’re all happy as a clam and we’re back in Guangzhou to bury the ghosts of the past!
Andy Fullard – team captain and band name collector, has opinions about Noddy
Tom Woods – vice captain, tour organiser and writer of complicated team songs
Mark Burns – happy clam
Brad Tarr – Batman
Richie Abbott – an Australian man masquerading as a Kiwi
Henry Parker – club newbie and run out specialist
Tom Callahan – a man desperate to replace “Dot” with “Shot” in his nickname
Ben Cooper – fines master, MC and erudite barrister
Khalid Hussain Butt – Hooray!
Nine of us there are. No worries, we’ll nab a couple of spares from somewhere. Let’s get that trophy!

The Game
The fine piece of silverware that is the Lamma Putty Trophy was contested over a 50 over game on Saturday, February 22nd. The Lamma CC tourists made their way to the Guanggong International Cricket Stadium in Guangzhou, having enjoyed the hospitality of the local culture, or as it is more widely recognised on a global scale, an Irish Pub, the night before. Captains Andy Fullard and James O’Donnell tossed up and Andy won, electing to bat first.
Note: This didn’t really happen. We all know that Andy never wins the toss. He just got lucky knowing that they wanted to field and he wanted to bat, so no need to toss up at all!
The Lamma innings began disastrously with Brad Tarr being caught behind fourth ball, then having a bit of a walk back and forth to decide on whether he’d hit it, the umpire remaining confused and eventually Brad deciding to exit the field. 0-1.
Andy Fullard and Tom Callahan then proceeded to slam on the brakes after the run fest of the first over, taking the score to a sedate 16 off 9 overs before Andy was caught for 11, miserably slashing at a ball that probably would have been called wide if he’d left the damn thing alone. 16-2.
Hussain marched to the wicket to first repair the damage… and then start to cause as much damage as he could.
Following the departure of Tom Callahan for 6, the team was in danger of a repeat of the antics of the previous year. We need not have worried.
Stepping up to the wicket at No.5 was Aussie Richie Abbott, fresh from a half-century and a stand of 97 with Hussain the week before in a league game. With confidence oozing from the both of them, and a considerable amount of hangover sweat oozing from Richie, the pair began what can only be described as an epic partnership that should live long in Lamma cricketing legend. Playing controlled shots all over the large field, Hussain and Richie batted their way to a partnership of 185, before Richie finally fell for 58, having admittedly rode his luck with four dropped catches along the way. But when it’s your day, it’s your day and you have to make the opposition pay for not taking chances, and Richie certainly did just that, eventually beginning to laugh out loud at the opposition by the time the fourth catch went down.
As the innings continued, Hussain became another creature altogether. The team marvelled at what he would produce in the final ten overs of the innings, as with able support from Mark “Monty the Happy Clam” Burns, he bludgeoned the Putty Beach attack to the tune of 198 not out. All that witnessed his knock that day will attest that it was a combination of serenity, placement and pure class. A nod must also go to Henry Parker, who spent around thirty overs padded up to finally go in and stand at the non-striker’s end for two balls at the innings close! His pads kept him warm all that time though, as the rest of us froze in the bitterly cold conditions!
Note: Monty selflessly ran himself out for 14 in order to get Hussain back on strike in the final over, so that he might attempt to get to 200… after what most educated drunkards would say was a selfish act of hitting a boundary to deny Hussain the strike the ball previously. LOL!

So, let’s have a bowl, shall we? Andy led the team out to the wicket confident that the total was more than defendable. The rest of the team shared that sentiment. Putty Beach had other ideas.
There is always the possibility when playing on a ground foreign to you, that you will be out-played by the team that knows it inside out. The Putty Beach batsmen play Twenty20 on this pitch approximately 40 Saturdays out of the year. And they came out swinging like they needed to knock the total off in 20 overs! The Lamma bowlers were treated to a succession of big hits over the top, with the general mentality of the batsmen being to go aerial and hit over the infield. But not to be fazed, our men stuck to their guns and chipped away, taking wickets at reasonable intervals. A tidy opening spell by Ben “MC Battery” Cooper in particular produced a couple of breakthroughs against batsmen who were merrily heaving the ball away. Hussain, Monty and Aussie Rich all produced tidy spells to force the batsmen to take more risks, before 46 overs into the innings, the returning Tom Woods claimed the penultimate wicket and the last rites were delivered courtesy of a run-out between a less than sober number 10 and a number 11 dressed like a member of 1980s funk-pop band Cameo, complete with box in a jockstrap over the top of his trousers. Word Up!
Note: The skipper bowled a spell that can best be described as charitable ... no, positively philanthropic! You know? Giving the opposition the chance to get back into the game!
Putty Beach were dismissed for the not too shabby reply of 270, meaning a total of 598 runs had been scored in the day, but most importantly – LAMMA CC HAVE WON THE LAMMA PUTTY TROPHY!!!
There were cheers and back-slaps all round, renditions of the team song on the bus as well as in front of an appreciative crowd in the pub later in the evening, some spectacular Irish Cossack dancing from MC Battery (Yes, the man made an Irish Jig look like something from Russia!), some boisterous sing-alongs with the band and finally the prospect of a Twenty20 game to round the tour off on Sunday. Marvellous! Many, many drinks for everyone!

We lost. Half our side was made up of theirs. Henry ran himself out.

Scheduled for May 10-12, Tom W. (One-Gee) has done some great organising for our Club's tour up to Guangzhou. It really looks a top venue and the weather should be good. Fine accommodation is sorted and is easily reached by the frequent and comfortable trains from Hung Hom.
The latest news is that we anticipate having an 11-a-side, 50 overs match against the best of our hosts - chosen from their 6 teams and we will field 2 teams in a sixes tournament of 8 teams for the Sunday.
We have around 18 players on this tour so everyone will be playing at least one of the days. Expect a very full-on weekend! 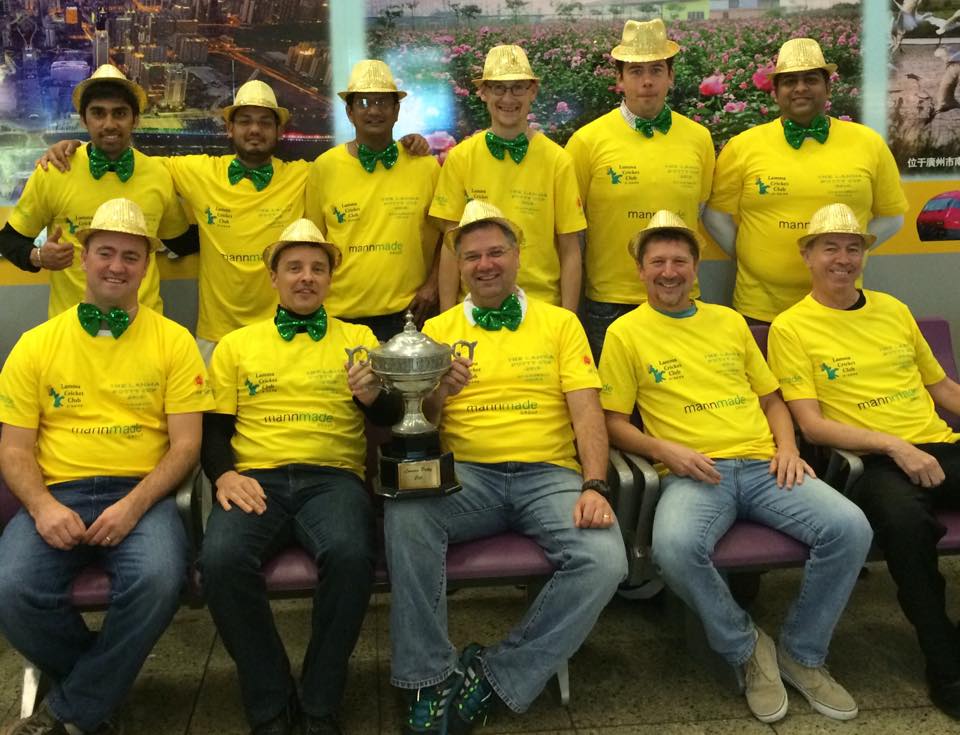 Lamma CC set off on a cold early morning venture up to Guangzhou on Saturday 6th Feb to defend The Lamma Putty Cup. The match was at the purpose-built cricket stadium where we were keen to defend the Cup we took away from Guangzhou the previous year.
Our intrepid tourists of Woodsy, Mikey, Joycey (Capt.), Ian, Andy F., Alex and Nitin, ably backed up with some HKU boys of Mick, Unmesh, Rishi & Ani headed straight up to the impressive ground - though not surrounds, described as looking like something out of Chernobyl.
The result was not to go our way, losing wickets at a steady rate as we chased Guangzhou's Daredevils testing score on a bare wicket. But as Arnie says, we'll be back - for another go at recapturing it.
Thanks go to James & Peter of The Daredevils for producing excellent sporting opponents and fine hosts and thanks also to Mike, Tom and Simon for sorting and arranging our team out. Great work fellas!