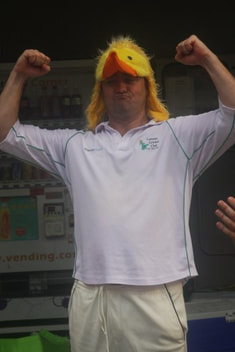 Click on the victorious League Team captain of the day - a rare Woods Duck - to view further pictures from the afternoon's action
After a 7 year hiatus we played our end of season Lamma v Lamma at the PTS, Aberdeen, on Saturday, 2nd May.
The day started well with an early arrival of practically all that said would attend and many were busy with the preparations of pulled pork burgers, fruit Pimms, cooling the mountain of beer, setting up the music and the pitch.
As well as 27 playing members, it was very well supported by partners, children, relatives and friends and really added to this fine occasion. Our 2 resident face-painters were kept busy by the many small and big kids alike and it was good to see that Edward from MannMade was also there to witness it all. (Mat, where were you, you were missed.)
The teams were captained by Woodsy, V.C. of the League Team, and Simon, Captain of the Social Team, for a 25 over match and the decision was to go with League vs Social - which raised a few eyebrows.
So stuffing down the delicious burgers, Pimms and beer (on and off the field!), we began battle. The League Team (all 13 players) batted first, with each batsman marching out to their own chosen piece of music, well most of the time anyway... A challenging target was set after some tight bowling and keen fielding, when the League Team reached 214 all out off the last + 1 ball.
The Social Team (of 14 players) set off in a hurried pursuit of the target but was steadily losing wickets - and sobriety - as the afternoon wore on. There was to be no loss of face for the League Team in the end as the Social Team were bowled out 14 runs short of their victory target. There was some mention of "dodgy scoring" through extras for the League Team, but we believe it is all sour grapes! Anyway, it was a lot closer than some might have anticipated.
Notable performances came from the bat of Adrian, Becks and Mudassir who all retired at reaching 25 runs and bowling from Chucker with 3 wickets. There was some excellent work in the field too with great catches from Mikey, Monty and The Fish behind the stumps.  It was also good to see our considerably younger players wading in with Guy "Joe Root" Jamieson and Iain “Aye, Aye” Fraser very much involved and looking forward to their participation in the Club's future.
With time called at the ground but still with a lot of food and beer to get through, Mike invited us all back to his nearby place so we could continue the partying which many of us did. Only once had we made an impact on the left-overs did we head to the Club’s favourite haunt, "Bar 42" aka "Barco", where a great many of us continued on ‘till heaven knows.
There were many Members involved in making the day so successful but major thanks go to Andy S and his wife Helen, for preparing the food and drink plus all the lugging around of it all, the ExCom of Monty, Andy F., Tom W., Simon, Tom C., Henry and Andy S. for all the behind the scenes arranging, Ian for the music, Alex for many of these photos, Mikey for getting us back to his place, Bar42 for the discounted drinks of which we still consumed a lot of, relatives and friends for supporting us, and Mat and Ed for sponsoring Lamma CC so we can have amazing events like this.
It was all just brilliant!