One of the original Lamma CC team from 1992, passed away on New Years Eve after a battle with heart disease. Clive was a very good friend John Fox and Dick Jones who passed away a four years earlier.

Lamma CC was saddened to hear that former Australia captain and legendary cricket commentator Richie Benaud has died at the age of 84.
A pioneering leg-spin bowler, Benaud played in 63 Tests, 28 as captain, before retiring in 1964 to pursue a career in journalism and broadcasting.
His final commentary in England came during the 2005 Ashes series, but he continued to work for Channel Nine in Australia until 2013.
In November, he revealed he was being treated for skin cancer.
Some famous Benaud phrases and one-liners:
"Morning everyone"
"It's gone straight into the confectionary stall and out again""
"And Glenn McGrath dismissed for two, just ninety-eight runs short of his century" 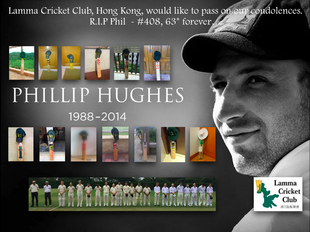 ﻿﻿Phillip Hughes:
Fans and players post cricket bat photos on Twitter﻿﻿
Cricket fans and players have been using their bats to pay tribute to Australian cricketer Phillip Hughes.
The 25-year-old died on Thursday - two days after being struck in the neck during a domestic match in Australia.
Thousands of people have posted photographs on Twitter, using hashtags #putoutyourbats and #putyourbatout.
Cricket Australia chief executive James Sutherland said: "People are putting bats in their back yard and in their front window. We thank them for that."
It has captured the imagination of the cricket - and sporting - world, with professionals, former players and amateurs alike joining in the trend as a mark of respect.

RIP Richard "Dick" Jones
We're saddened to hear of the passing (27th Nov 2014) of Richard "Dick" Jones in his sleep at home on Lamma.
Dick was one of the original Lamma CC players before the club entered the Saturday League and was the first to hold the title of Lamma's "Best American Cricketer".
A professional photographer and cameraman, Dick was an enthusiastic, friendly character with a wealth of stories, personal adventures and stuff to talk about. Dick was a joy to know and went on several Club tours mostly in the 1990's as a player and supporter.
Many will know him for his "Dickstock" annual party / booze up featuring local bands which he held in his garden as late into the night as law enforcement allowed. He also featured in Howard Mark's autobiography.
Dick was one of life's characters and good guys, and will be sadly missed. Raise a beer for him. RIP Dick.