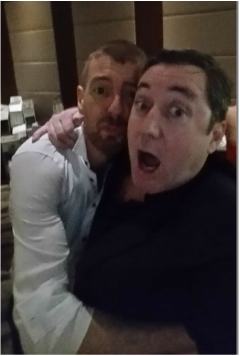 Bloody hell, what a Lamma CC Ball that was!

It was brilliant to see so many people attend – the most we have ever had – and all looked like they were having a great time and how could they not?!
The organizing of Andy Scott and his able assistants made sure nothing was overlooked, the HKCC did a fine job with the preparation and keeping all the guests well fed and watered while the entertainment was fantastic from Ross’ band, The Red Stripes.
Leading us through all the entertainment was our super-slick M.C. of the night, our very own Mark Burns. Taking us through the auction, as if he hadn’t done enough as it was, was Andy Scott, doing a great job of extracting as much money from the bidders as possible for our Club and the Nepal Shelterbox charity. We are fortunate to have these two in our Club and they do a fantastic job.
It was wonderful to be part of the trio of Life Members on stage to present a Life Membership to John Gaffney after 20 years of playing for our fine Club. Sadly, ‘Gaffa’ will be leaving our shores to head back to the UK soon and he will be missed, but we all wish him well for his return.
I was amazed to read that the Red Stripes only played for beer at our event. They are a top band here in HK, their music is really tight and a lot of fun to dance to. When they play locally, I strongly recommend you go to see them, but be warned, it will be crowded. Thanks go to Ross and his band for fitting us in to their busy schedule.
Of course there were a number of other people making the event as successful as it was, with Brenton continuing the music as DJ once the band had finished and his Father, Royce, for again securing the venue for us. Oh, and let's not forget poor Henry who has to collect the money from us all and deal with payments. Please pay promptly, it's a rotten job so let's make it as easy for him as you can.
Impressive were our guests living on mighty Lamma who came to the Ball and then attended their dragon boat race on Lantau early the next day. They make them tough there!
It’s going to be difficult beating this as the bar is now raised pretty darn high, but hey, we can worry about that next year. We can now focus on our Club tour and replacement equipment for the new season. Can’t wait for the news!
Right then, you probably want to see some pics of the night and to admire yourselves, so scroll down a little further.

What our organiser, Andy Scott, had to say about the Ball ...

A massive congratulations to everyone involved with the ball on Sat night. It was a great success and a magic laugh. 121 turned up with 24 Lamma players there.
We raised a considerable amount for the club and HK$20k for the Shelterbox Nepal charity.
A big thank you to people who sold tickets, especially Patrick, Chucker and Tom Woods who filled full tables.
We got great raffle prizes from Chucker, Brad, Joycey and my wife. Thanks for hounding people.
The auction was a huge success thanks to Royce, Brenton, Ben, Andy F, Patrick and especially Mark Burns. Great job sourcing stuff guys.
The evening was again made by Ross's magnificent band the Red Stripes (who only get paid in beers). Thanks so much Ross.
Please take time to write to anyone who delivered a prize and thank them personally.
A big thank you also to Chucker who organised all the artwork, to Brenton for DJ-ing and to Royce who underwrites the HKCC account.
Congratulations to Gaffa on his Life Membership Inauguration, the club is sadly losing a legend and 20yr stalwart.
Well done everybody, a great team effort and should make for a magnificent tour later in the year.