Looking after your Club this season is a particularly keen and seasoned Executive Committee.
The beginning of the season is normally a busy time with HKCA & Club membership administration and sponsorship (which is again kindly supported by HK Electric). But with this being our 20th Anniversary year we have resurrected our “Cricketers Ball” and produced this new website, both projects of which are full time jobs on their own! To add to that there has been stock-taking and purchase of a lot of top-of-the-line equipment and new shirts and stubby holders designed and put into production - all of which will be available in the coming weeks.
Another very important step for the Club that we have undertaken is the rebuilding of our Saturday League squad to make it as competitive as it can be to get us out of Division 2 and into Division 1. As part of this rebuilding we are planning to invest in a top player/coach and we are taking more net sessions on a more regular basis.
The net sessions are going well and have so far brought in a number of new faces and a warm LCC welcome goes out to you all.
The Saturday League format this year has brought on issues the Club is not happy regarding the quantity of games and we are not alone in this, with other teams mentioning their dissatisfaction. There will only be 10 league matches this season while HKCA fees have increased. We are doing what we can to change the situation but that will have to be for another season.
Pitch shortage is the main culprit for this situation and this makes things particularly difficult for social matches. Our friends at HKU give us 3 games a season and we hope we can pick up a few more at other grounds later on. A Friday afternoon game at the KCC should be one of them, with opposition to be sought and confirmed.
There are of course a number of sixes tournaments we get involved in and there is also the occasional tour that all are welcome to join. They are always great fun and this season Phnom Phen in Cambodia is a consideration for a tour.
Once we get the Cricketers Ball out of the way, we then plan to see what we can do for coaching the many children that live in Yung Shue Wan, Lamma – our spiritual home - and re-visit the idea of the Lamma Cricket Ground - the LCG.
So as you can see, there’s quite a lot to do and be involved in for this coming season.
Watch this space! 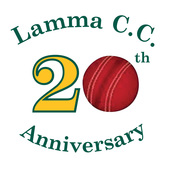 Somehow or other we have made it to the grand old age of 20 and never have we looked in better shape. Who would have thought it when the Club was formed in the Waterfront on Lamma so many years ago. It first started as a source of community sport for the keen, able and not-so-able for the Lamma residents and grew to be so much more than this, bringing great enjoyment over the years to a lot of our Members, and even opposition. The team picture in the top bar is that first team 20 years ago, you might recognise one or two faces from it...
Let's look forward to a whole lot more enjoyment and success.