1.    Chairman’s welcome and thanks to the Executive Committee and all Members for making it the successful season that it was.
2.    Confirmation of the 2016 AGM Minutes were agreed with the proposal by Ian & seconded by Brad.
3.    Reports from LCC Executive Committee:

Outstanding stats
Dave – Treasurer’s report
As at end-May 2017 the club is in a sound positive financial position.
Particular thanks for this position go to the efforts of external sponsorship totalling HK$111,000 from iTrust, HK Electric, Forbes 36 Bar, The Island Bar and Ashford Benjamin.
Warm thanks for Ben Cooper for taking the reins of this sponsorship effort.

Current position:
The club is in the black by approx. HK$220,000 but noting that some collections remain viable but outstanding. All full-year membership payments are paid to some HK$22,000.

The club has approx. HK$155,000 in bank and cash in hand and a significant amount owed to the club of over HK$70,000.
These outstanding items include:
Key expenses:
The Club has provided a number of subsidies to tours and events such as the Kowloon Corporate 6’s, Forbes Xmas party, Phuket 7’s, HKU dinner, this AGM, Mongolia Tour, etc.

Some subsidies remain to be reimbursed.

Other key activities:
A seemingly-simple task of obtaining Internet Banking has taken the best part of a year, and Ian Harling and I have put a lot of time and effort in getting the banking streamlined. At the last stage of a number of obstacles, we hit the wall of the Hong Kong Licencing Police. The quest will continue. A future Opera will be written about this event with the help of Andy Fullard.

Key focus for financial year 2018:
Royce – Manager’s report
Lamma CC training and coaching at HKCC went well until HKCC stopped our coach, Scott, from the great work he was doing with LCC, late in 2016. We managed to maintain nets at various locations, including HKCC on personal membership accounts.
Recently we have re-secured the services of coach Scott, who is now head coach at the KCC.
In 2017-18 we will explore if HKCC can provide further coaching and nets there.
Regarding the selection committee, we had a few dilemmas during the season, but overall retained a policy of playing the strongest team available.
During the season we also had 2 recruiting cycles.
Getting 3 recruits from Taipans has yielded us depth plus it brought 2 further connections in Vivek and Nikhil, both talented league players.
Going forward, a clearer policy or a wider understanding of our membership/playing policy needs to be made.
I think every club member should be proud that we as a Club are improving the League team.
For the 2017-2018 season, I believe we will have a very competitive team and will challenge top 4 unless changes to Premier League rules by Cricket HK bring more Sunday League players to the Saturday League, in particular, Division 2 clubs.
I thank every player for their support in 2016-17 season.

Benny – Sponsorship & Marketing Manager’s report
Thanks were passed to all our sponsors, three of which were at the venue – with Suman, manager of Forbes 36, Brad, owner of The Island Bar and our own S&M Manager, Benny, as MD of Ashford Benjamin.
Major appreciation went to Mat Davies of iTrust for the financial support they give us and it is anticipated that they will commit to another 2 years of sponsorship when the current contract expires.
HK Electric continues their long commitment to Lamma CC and do not look for any recognition as such.
The Club is of course always looking for further sponsorship and any possible openings we ask that Benny is informed to follow up.

Star #4: CHK attended eventsBlazers on show again
Helped to build connections with CHK.
Great to see Max and Matt at the LCC Quiz.
The fact that we let them win means that they will be back at The Island Bar for more.

Star #5: Mongolia tour
We could not be the first to Mongolia as Craigengower CC were to beat us by a few weeks, but the consolation was that there was a drinks ban for 2 of the 3 nights they were there!
Thanks to Richie for getting this happening.

Wish #1: More support for non-cricket related events
While altogether a terrific year socially, it would be great to get some more support for non-cricket related events. Some events and tours were cancelled this season due to lack of numbers and time was spent trying to chase attendance at other events. Let’s get more bums on seats. This will help us to be a club as opposed to a couple of cricket teams playing in parallel.

4.    Thanks were again given to the outgoing ExCom

5.    Nominations for election of new Executive Committee officers for 2017-18 season went unchallenged and were thus welcomed as the new Executive Committee for the coming season:
6.    Chairman’s acceptance speech – abridged version.
My three goals for 2017-18; solidarity, sustainability, pride.
i. Solidarityii. Sustainability
Supporting the youth development programme. We need to do this if we want to keep our voting rights. In terms of Lamma CC’s longevity, it makes sense.
iii. Pride
Growing Lamma CC pride though celebrating victories, singing the team song, wearing our beloved blazers, and most importantly looking after our mates.

Gents, I am very proud to stand before you as the newly appointed Chairman of this great Club.
The Lamma Cricket Team is the best cricket team!

7.  AOB:
The AGM drew to a close at 8.45pm and the Club’s End of Season Awards presentations were held.
Awards presented were:Congratulations to you all!
The Lamma CC AGM & Awards Dinner
Ista Restaurant, Lan Kwai Fong, 15th July 2015

The AGM covered our various aspects of the season which included a number of high points from the season, in chronological order - the first junk trip and beach cricket to Lantau, the Intra-Lamma at PTS, the Cricketers Ball, an increase in social games, a very healthy Treasurers report and an impressive amount given to the Nepal Disaster fund.
The reports were followed with the electing of positions for various positions within the Executive Committee. Tom Woods, Tom Callahan and Brad Tarr stood down from their positions of Vice Captain, Secretary and Manager respectively and thanks go to them for their past season's contributions.
Adrian Sargent was voted in as Vice Captain, while Ian Harling filled the vacant Secretary position and Royce McDonald the vacant Manager position. All other positions remained the same personnel.
The full Executive Committee is:We look forward to continue, and improve, on the good work that was done by the previous ExCom.
Once the AGM was over, we set out to enjoy the curry buffet and beers and be entertained by the giving out of the Awards.
The Awards presented were:Congratulations to all four of you and hope you can improve on your good form into the next season! 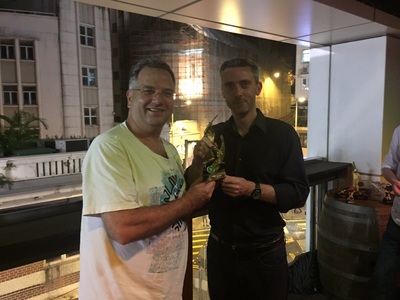 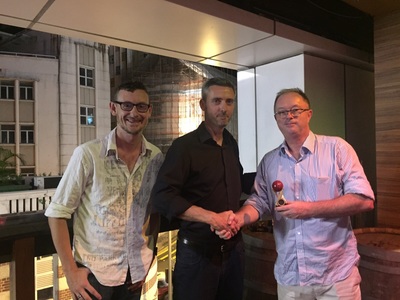 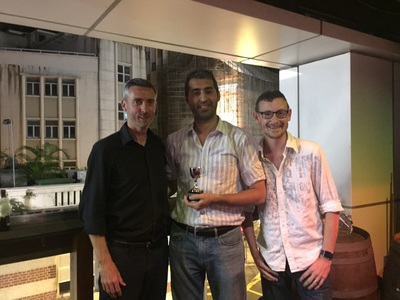 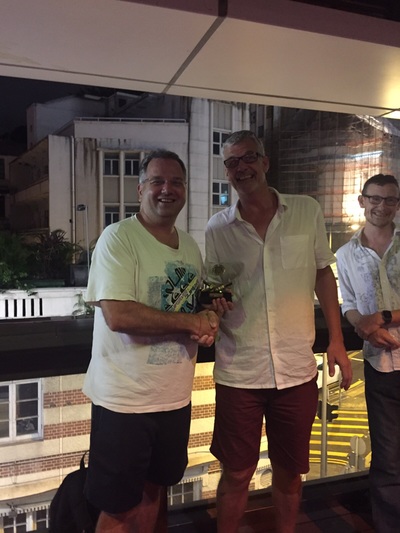 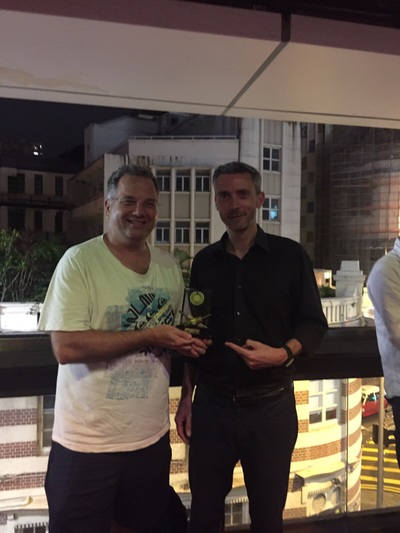 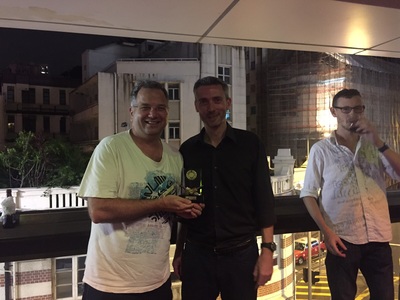 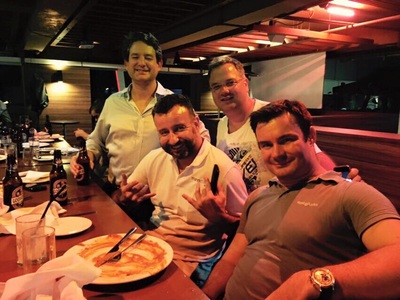 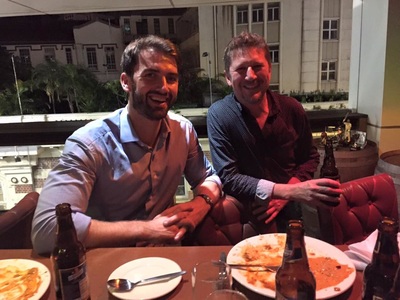 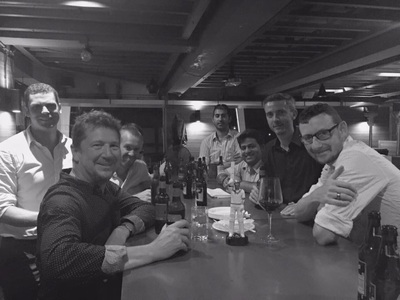 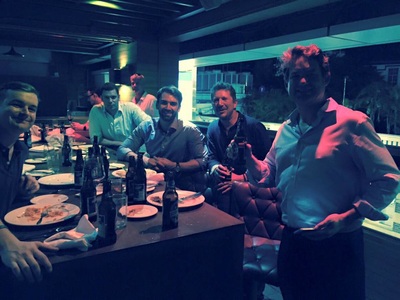 The League Captain's "Accolades" (players with at least 3 league games in the season) was generally less than complimentary from the observations of players throughout the season and they went to:NB. Any issues with the above Accolades should be directed to your financial ombudsman, OFCOM, the BBC's flagship complaints programme "Points of View" or anyone else who might respond... because apparently, the skipper won't!